The Talkative Tortoise.....a tale from the Panchatantra 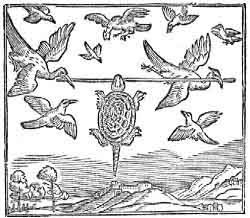 Once upon a time, a Tortoise lived in a pond with two Ducks, who were her very good friends. She enjoyed the company of the Ducks, because she could talk with them to her heart's content; the Tortoise liked to talk. She always had something to say, and she liked to hear herself say it.

After many years of this pleasant living, the pond became very low, in a dry season; and finally it dried up. The two Ducks saw that they could no longer live there, so they decided to fly to another region, where there was more water. They went to the Tortoise to bid her good-by.

"Oh, don't leave me behind!" begged the Tortoise. "Take me with you; I must die if I am left here."

"But you cannot fly!" said the Ducks. "How can we take you with us?"

The Ducks felt so sorry for her that at last they thought of a way to take her. "We have thought of a way which will be possible," they said, "if only you can manage to keep still long enough. We will each take hold of one end of a stout stick, and do you take the middle in your mouth; then we will fly up in the air with you and carry you with us. But remember not to talk! If you open your mouth, you are lost."

The Tortoise said she would not say a word; she would not so much as move her mouth; and she was very grateful. So the Ducks brought a strong little stick and took hold of the ends, while the Tortoise bit firmly on the middle. Then the two Ducks rose slowly in the air and flew away with their burden.

When they were above the treetops, the Tortoise wanted to say, "How high we are!"

But she remembered, and kept still.

When they passed the church steeple she wanted to say, "What is that which shines?" But she remembered, and held her peace.

Then they came over the village square, and the people looked up and saw them.

"Look at the Ducks carrying a Tortoise!" they shouted; and every one ran to look.

The Tortoise wanted to say, "What business is it of yours?" But she didn't.

Then she heard the people shout, "Isn't it strange! Look at it! Look!"

The Tortoise forgot everything except that she wanted to say, "Hush, you foolish people!" She opened her mouth,-- and fell to the ground. And that was the end of the Tortoise.

It is a very good thing to be able to hold one's tongue!

from Stories to Tell to Children by Sara Cone Bryan


Posted by La, Storyteller/Storysinger at 4:40 AM