The Dog in the Manger...an Aesop fable 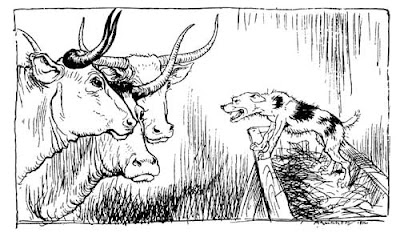 A Dog was lying in a Manger on the hay which had been put there for the cattle.
When the cattle came and tried to eat, he growled and snapped at them and wouldn't let them get at their food.
"What a selfish beast," said one of them to his companions; "he can't eat the hay himself and yet he won't let those eat who can."
Posted by La, Storyteller/Storysinger at 7:40 PM