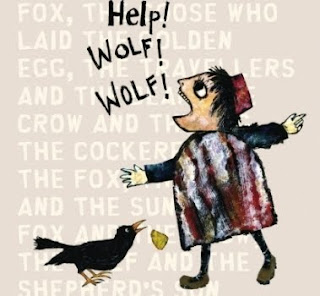 Btw, I put this up just cause I found it interesting :-P


A fable is a succinct story, in prose or verse, that features animals, mythical creatures, plants, inanimate objects, or forces of nature which are anthropomorphized (given human qualities), and that illustrates a moral lesson (a "moral"), which may at the end be expressed explicitly in a pithy maxim.

A fable differs from a parable in that the latter excludes animals, plants, inanimate objects, and forces of nature as actors that assume speech and other powers of humankind.

For all of you word buffs (like myself), once again according to Wiki:


The word "fable" comes from the Latin "fabula" (a "story"), itself derived from "fari" ("to speak") with the -ula suffix that signifies "little": hence, a "little story".

Though in its original sense "fable" denotes a brief, succinct story that is meant to impart a moral lesson, in a pejorative sense, a "fable" may be a deliberately invented or falsified account of an event or circumstance. Similarly, a non-authorial person who, wittingly or not, tells "tall tales," may be termed a "confabulator".

An author of fables is termed a "fabulist," and the word "fabulous," strictly speaking, "pertains to a fable or fables." In recent decades, however, "fabulous" has come frequently to be used in the quite different meaning of "excellent" or "outstanding".

Posted by La, Storyteller/Storysinger at 8:15 PM