What is a Fable? 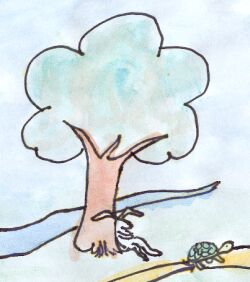 What is a fable?

Once I asked myself the question, I realized I did not know what exactly made a story a fable as opposed to a folktale or fairytale. I decided that I should put up at least a short blog on what makes a fable a fable. So, I went to my favorite source, that I tend to take with a grain of salt but it's still good, wikipedia. I do check other sources but Wiki is so much fun! Wiki says.....

A fable is a brief, succinct story, in prose or verse, that features animals, plants, inanimate objects, or forces of nature which are anthropomorphized (given human qualities), and that illustrates a moral lesson (a "moral"), which may at the end be expressed explicitly in a pithy maxim.

A fable differs from a parable in that the latter excludes animals, plants, inanimate objects, and forces of nature as actors that assume speech and other powers of humankind.

I've checked and that's a pretty much agreed upon definition of a fable. Like most definitions there are exceptions. There are some fables that feature humans as well as or instead of animals, inanimate objects, etc. but your more traditional fable sticks to the definition above.

The most famous/best known fabulist is Aesop. Although a great deal is not really known or agreed upon about Aesop, most references agree that he was at one point a slave in Greece somewhere around the mid 6th century BCE.
Some of the fables that are called Aesop's fables were not written by him but the label "Aesop's fables" has also become a blanket term for collections of brief fables, usually involving personified animals.
A few of the best know Aesop's fables are The Fox and the Grapes, The Tortoise and the Hare, The North Wind and the Sun, The Wolf in Sheep's Clothing, The Crow and the Pitcher and The Boy Who Cried Wolf.
Enough about Aesop.

There are other fabulist, this is just a quick list of those I thought people would recognize. Some of the fables are not fables in the strictest sense of the word, mostly because they feature people, but otherwise they follow the accepted definition for a fable.
Posted by La, Storyteller/Storysinger at 1:09 PM